Today I finished reading Hilda Lewis’s Wife to Great Buckingham, a 1959 novel about Catherine Manners, wife to George Villiers. This is the second book by Lewis I’ve read, the first being Harlot Queen, about Isabella, wife to Edward II.

Harlot Queen was written in the third person, and I wish this novel had been also. Catherine is the narrator, and unfortunately, she never really came to life for me. She showed some promise in the early part of the novel, dealing with her youth, and she became almost interesting in the last chapter of the novel, dealing with her second marriage, but in the long stretch in between she was little more than a reporter of other people’s doings. This could have worked, I suppose, in some circumstances, but I don’t think it did here.

A big problem for me was that although Catherine often professes her love for Buckingham (and in real life, I believe she was quite fond of him, and he of her), we see very little of the two as a couple, and on the few occasions when we do, we see little of their affection in evidence. On the few occasions when the two hold a conversation, it might as well be one between business associates as one between a married couple.

Historically, this novel seems rather eccentric. As Lewis would have it, the main cause of Buckingham’s undoing was his hopeless love for the Queen of France, which drives him into an unpopular war and Lewis’s prose into the realm of the purple: “‘His passion burns him like a fire. He starves for the sight of her. I tell you he cries out her name in his sleep.'”

Add to this a tedious subplot involving Catherine’s adulterous sister-in-law and her persecution by the Villiers family, and I admit I was doing some heavy-duty skimming toward the end.

Sadly, I don’t know much about the real-life Catherine Manners, but the online Oxford Dictionary of National Biography article about her by Jane Ohlmeyer indicates that she was an interesting woman, one in need of a better novel than this.

On a happier note, this is one of my finds at the book sale on Monday. Check out the nicely contrasting queens–brunette Blanche of Castile in pink, blond Isabella of Angouleme in blue. Not to mention Isabella’s bangs (fringe, I think, to some of you) and the big pointy hennins that these thirteenth-century trendsetters have acquired a couple of centuries beforehand. 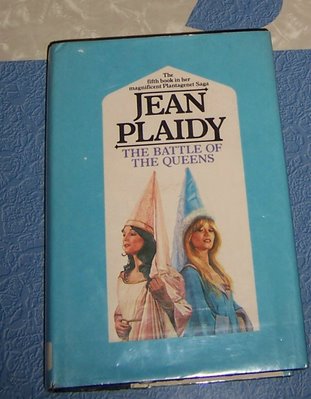 8 thoughts on “Buckingham’s Wife, and Some Very Stylish Queens”