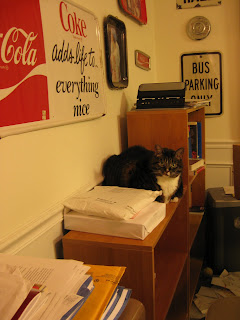 Eek! How long has it been since I’ve blogged? I’ve been doing a blog tour, and Margaret of Anjou has been a hard taskmistress (as you might expect), but I hope to be back to some more posting soon. In the meantime, here’s Stripes in what passes for my office (which is actually a wall of the kitchen that has gradually been overrun by bookshelves). Note those half-empty shelves begging to be filled!

I wanted to thank everyone who enjoyed my post on the Wars of the Roses on Facebook, and in particular Sharon Penman for mentioning it on her Facebook page. (I let out a big squeal that day!) And I also want to thank everyone who’s hosted me on my blog tour. You can see where I’ve been and where I’m going in the sidebar. And another thanks to those who have reviewed and/or bought The Stolen Crown!

Since I’m in me mode at the moment, if you’re on Goodreads, stop by my question-and-answer page, where I’ll answer questions about my books and anything else (except for my Social Security and bank account numbers).

I hope to be journeying to the library today to make headway on a question that’s been nagging me during the last few days: was Henry Beaufort, Duke of Somerset, still in Bruges in March 1462, or had he already left for Scotland? Cora Scofield, based on the Paston letters, says Scotland; Michael Jones, based on a Burgundian source, goes for Bruges and cites a source in French, which is supposed to be on the shelves of the library. I’m more inclined to go with Jones, since he’s done extensive research in this area, but I’m obsessive enough to want to look for myself. Anyway, it gives me an excuse to go to the library.

And finally, since I gave Stripes some face time, here’s Onslow, King of the Files (my husband is changing offices): 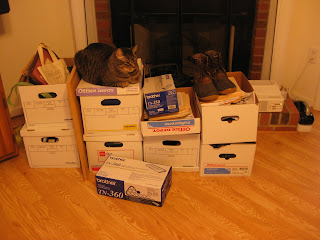 4 thoughts on “Back to Bloggin’, Sort Of”