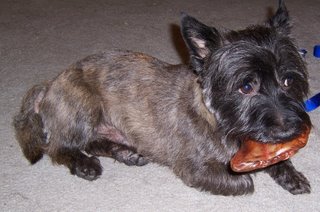 So what does my cairn terrier, Boswell, have to do with Richard III? Nothing, except that he went to the groomer the other day, and he looks so pretty, I wanted to post his picture before he reverts to his usual scruffy self.

Anyway, now that Isabella of France is not commandeering my computer, I thought I’d mention The Seventh Son, a historical novel by Reay Tannahill about Richard III, a figure without whom historical novelists would surely be lost. I’m happy to report I enjoyed this one better than most about this king.

Tannahill’s novel picks up shortly after the battle of Tewkesbury, with Richard and his brother George fighting over the Warwick inheritance, and ends at Bosworth. It’s written in a sardonic, somewhat emotionally detached style that may be off-putting to some readers but which I liked.

Richard III is portrayed by Tannahill as neither a villain nor a saint, but something in between–in other words, as a fallible human being. He marries Anne for her lands, not for love, but he’s a faithful husband who eventually comes to love his wife and is devastated by her death. Though he governs fairly, he has a ruthless streak and has no qualms about taking the lands of the Countess of Oxford or about his mother-in-law’s dispossession. He makes mistakes: Richard’s act of executing Hastings without trial on very flimsy grounds engenders distrust and hostility that haunt Richard throughout his reign, ultimately leading to his defeat at Bosworth.

Anne Neville is attractively portrayed as a resilient young woman with a backbone and opinions of her own. The episode where she works as a kitchen maid, pure melodrama in the hands of some novelists, is almost farcical here–Anne, seeing Richard come to rescue her, does not swoon or burst into tears of relief, but tidies her hair. She has a sense of humor, which Richard does not always appreciate. (“‘Two more bastards?'” she asks when Richard, having already invited his out-of-wedlock children to spend Christmas at court, proposes to invite his nieces as well.) Her death scene is moving without being maudlin.

The Woodvilles are their usual villainous selves, but at least they’re villains with a sense of style. (“‘Dear me. I will have to think of something else,'” says Elizabeth Woodville when Richard tells her he always checks his food for poison.) With a few exceptions, such as Richard’s friend Francis Lovell, a major character with a well developed personality, most of the other characters are sketched in, but they’re vivid sketches. I liked this sentence in particular, uttered by Edward IV’s womanizing friend about Jane Shore: “‘Lovely woman,’ sighed Lord Hastings, doggy-eyed.”

For those of us who like author’s notes, Tannahill provides a long one, including a section on further reading.

So, a cute doggy picture and another book about Richard III. What more could one ask for in blogland?

7 thoughts on “Another Book About Richard III, Plus a Not-So-Scruffy Dog”