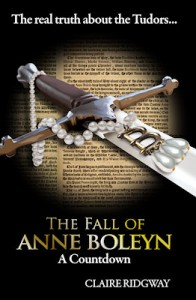 As I mentioned a couple of days ago, I’m delighted to welcome Claire Ridgway to my blog! Claire’s new nonfiction book, The Fall of Anne Boleyn: A Countdown is a concise day-by-day look at the events leading up to the execution of Henry VIII’s most famous queen.

Claire is also offering a surprise to one lucky person who comments here before before midnight on May 30, US  Eastern Standard time: an Anne Boleyn wine stopper! And as a bonus, I’ll throw in a copy of Her Highness, the Traitor (in which Anne Boleyn makes a cameo appearance to give some helpful advice to one of the heroines).

So without further ado, here’s Ms. Ridgway to point out that sometimes, a hare is just a hare. 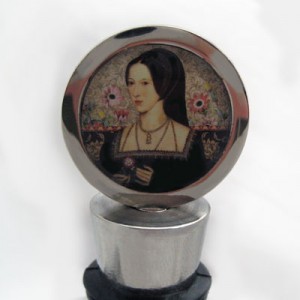 In the lead-up to the anniversary of Anne Boleyn’s execution on the 19th May, I noticed lots of Tweets and Facebook comments referring to Anne Boleyn being charged with witchcraft, in addition to treason, adultery and incest. I bit my tongue and sat on my hands, resisting the urge to point out the glaring error in these posts. Then, as I was sitting there itching to reply, I saw Hilary Mantel’s article in The Guardian newspaper. Its title: “Anne Boleyn: witch, bitch, temptress, feminist” – face palm!

Some non-fiction authors and historians give credence to the witchcraft theory. In her biography of Anne Boleyn, Norah Lofts writes of Anne bearing a mole known as the ‘Devil’s Pawmark” and making a “typical witch’s threat” when she was in the Tower, claiming that there would be no rain in England for seven years. Lofts explains that seven was the magic number and that witch’s were thought to control the weather. What’s more, Anne had a dog named Urian, one of Satan’s names, and she managed to cast a spell on Henry which eventually ran out in 1536, hence his violent reaction, “the passing from adoration to hatred”. Lofts goes even further when she writes about the story of Anne haunting Salle Church in Norfolk, where, according to legend, Anne’s body was really buried. Loft writes of meeting the sexton of the church who told her of how he kept vigil one year on 19th May to see if Anne’s ghost appeared. He didn’t see a ghost, but he did see a huge hare “which seemed to come from nowhere”. It jumped around the church before vanishing into thin air. According to Lofts “a hare was one of the shapes that a witch was supposed to be able to take at will” and she pondered if it was indeed Anne Boleyn.

That all sounds rather far-fetched, but reputable historian Retha Warnicke also mentions witchcraft in her book on Anne, writing that sodomy and incest were associated with witchcraft. Warnicke believes that the men executed for adultery with Anne were “libertines” who practised buggery and, of course, Anne and George were charged with incest. Warnicke also thinks that the rather lurid mentions in the indictments of Anne procuring the men and inciting them to have sexual relations with her was “consistent with the need to prove that she was a witch”. She continues, saying that “the licentious charges against the queen, even if the rumours of her attempted poisonings and of her causing her husband’s impotence were never introduced into any of the trials, indicate that Henry believed that she was a witch.” Now, Henry VIII may well have said “ that he had been seduced and forced into this second marriage by means of sortileges and charms”, but I don’t for one second believe that Henry was convinced that Anne was a witch. If he had believed it, then surely Cromwell would have used it to get Henry’s marriage to Anne annulled. If Anne was a witch then it could be said that Henry had been bewitched and tricked into the marriage, that the marriage was, therefore, invalid. Anne Boleyn was charged with adultery, plotting the King’s death and committing incest with her brother, George Boleyn, Lord Rochford. There was no mention or suggestion of witchcraft or sorcery in the Middlesex or Kent indictments and at her trial, Anne was found guilty of committing treason against the King – again, no mention of witchcraft. Although witchcraft was not a felony or a crime punishable by death until the act of 1542, a suggestion of witchcraft could still have helped the Crown’s case and served as propaganda. I believe that the details of the indictments were simply there for shock value, rather than to prove that Anne was a witch.

So, where does the whole witchcraft charge come from if it was not mentioned in 1536? Well, I think we can put some of the blame on the Catholic recusant Nicholas Sander, who wrote “Rise and Growth of the Anglican Schism” in 1585, while in exile during the reign of Elizabeth I, Anne Boleyn’s daughter. In his book, Sander describes Anne Boleyn as having “a projecting tooth”, six fingers on her right hand and “a large wen under her chin” – very witch-like! He also writes that Anne miscarried “a shapeless mass of flesh” in January 1536. This “shapeless mass” was turned into “a monster”, “a baby horridly malformed, with a spine flayed open and a huge head, twice as large as the spindly little body”, by historical fiction writer Philippa Gregory and was used to back up the idea that Anne had committed incest and dabbled in witchcraft. However, Sander’s words have to be judged as Catholic propaganda, as an attempt to denigrate Elizabeth I by blackening the name of her mother. Sander was only about six years of age when Anne died, so he could hardly have known her, and he was a priest, not a courtier, so would not have heard court gossip about Anne. None of Anne’s contemporaries mention an extra finger, projecting tooth or wen, and even Anne’s enemy, Eustace Chapuys, describes her miscarriage as the loss of “a male child which she had not borne 3½ months”. He would surely have mentioned it being deformed, if it was, and I’m sure that Chapuys would also have mentioned any physical deformities that Anne possessed. He nicknamed her “the concubine” and “the putain”, or whore, so he wasn’t afraid of saying what he thought!

While I cannot prove that Anne Boleyn was a witch, I can cast doubt on this belief. Norah Lofts’ claims can easily be refuted. Anne’s mole was simply a mole, her dog was named after Urian Brereton (brother of William Brereton, who gave the dog to Anne), Anne’s mention of the weather in the Tower was simply the ramblings of a terrified and hysterical woman, and the hare was simply a hare! As for Retha Warnicke’s views, I have found no evidence to prove that the men executed in May 1536 were homosexual and the only evidence for the deformed foetus is Nicholas Sander. Also Henry’s words concerning “sortileges and charm” were more likely to have been bluster, rather than a serious accusation. He also said that Anne had had over 100 lovers and that she had tried to poison his son, Fitzroy, and his daughter, Mary. The bluster of an angry and defensive man, I believe, and not something to take seriously.

In conclusion, witchcraft was not something that was linked to Anne Boleyn in the sixteenth century, so I feel that it is about time that people stopped talking about Anne and witchcraft in the same breath. Let’s get the facts straight.

Nicholas Sander,  Rise and Growth of the Anglican Schism, 1585

77 thoughts on “Anne Boleyn and the Charge of Witchcraft: A Guest Post by Claire Ridgway”