To start the weekend off with a bang, I’m delighted to announce that Sharon Penman, whose latest novel, The Devil’s Brood, has just been released, has very kindly agreed to stop by Historical Fiction Online and answer some questions. She’ll be by at noon on Sunday, October 19, US Eastern Standard Time. So feel free to join and ask some questions, or just join and lurk! (You’ll need to join a little ahead of time, because a spam invasion the other day caused us to start approving new members.) And if you haven’t read Devil’s Brood yet, do–it’s the sequel to Time and Chance and is a great tale of Henry and Eleanor and their sons, one of England’s most dysfunctional royal families.

Historical Fiction Online, by the by, is co-administered by Marg over at Reading Adventures and by yours truly. It’s a fun site, and a very congenial one.

Now for the tidbit: a couple of days ago, I started reading The Passionate Queen by Barnaby Ross, a historical novel about Margaret of Anjou. Being a curious lass, I Googled to see what I could find out about Ross and discovered that it was a pseudonym for Daniel Nathan and Manford Lepofsky, cousins who created the well-known Ellery Queen detective series. But the plot thickens: Nathan and Lepofsky also allowed a third writer, Don Tracy, to publish historical fiction as “Barnaby Ross,” and it is he who wrote The Passionate Queen. Don Tracy (1905-1976), whose other historical novels can be seen at one of the links above, was a prolific writer of pulp crime fiction who also wrote under the name of Roger Fuller. He seems to have had very broad interests, writing crime fiction and historical fiction from a variety of periods and touching on subjects such as racism and alcoholism.

The Passionate Queen (1966) is quite well written, though I was somewhat taken aback when a few pages in, the narrator, a knight who serves Margaret of Anjou, relates how the seven-year-old Margaret instructs the 10-year-narrator to seduce her 15-year-old sister so that Margaret can steal one of her dresses. Our precocious hero duly performs his task and loses his virginity, a task that he informs us was made easy and pleasant by the sister’s “lubricity.” I was pleased to find that Margaret did not demonstrate similar lubricity, but has her son dutifully fathered by Henry VI.

In parting, here’s the cover for the Pocket Books edition of The Passionate Queen (50 cents), on which a previous owner has scribbled “Henry IV Lancaster.” With that hennin and that low-cut neckline, Margaret looks as if she could easily go airborne. I also like the last page of the book, which on one side contains an ad for Edward Albee’s Who’s Afraid of Virginia Woolf? (75 cents) and on the other for a series of Playboy books, including the perennial More Playboy’s Party Jokes (also 75 cents), accompanied by cartoons of lubricious young women wearing nothing but black stockings. Something was lost when the publishing world decided to start issuing historical novels in decorous trade paperbacks, wasn’t it? 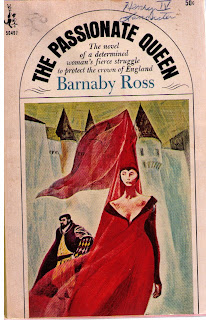 4 thoughts on “An Announcement and a Tidbit”