Everyone is doing great with the cat-naming contest. Keep those entries coming–you have until the fifteenth, after which Kitty shall no longer be nameless!

For those of you who are wondering, I’ll still be dealing with medieval/Tudor topics on this blog, albeit mixed in with topics related to the book I’m currently writing–one set in Civil War America. Today’s post happens to have a foot in both camps.

In the winter and spring of 1865, John Wilkes Booth and a handful of his companions were plotting to kidnap President Lincoln. One of those involved in the kidnap plot was young John Surratt, whose mother, Mary, ran a boarding house in Washington. With the idea of kidnapping the president, a frequent theatergoer, as he watched a play, the conspirators decided to scout out the theater by taking in a performance. Accordingly, John Surratt and another plotter, Lewis Powell (staying at the boardinghouse in the guise of a Baptist minister, and using an alias), escorted two of Mrs. Surratt’s boarders, nineteen-year-old Nora Fitzpatrick (whose cat you’re busy naming) and ten-year-old Catholic schoolgirl Mary Apollonia Dean, to Ford’s Theatre on March 15, 1865. 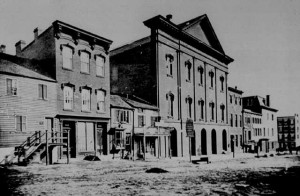 The idea, according to another boarder, Louis Weichmann, had been to take the youngest boarders to the theater, but as the second-youngest girl on the premises was preparing for her first Communion, Nora was chosen in her place. Weichmann, who would be a star government witness at both Mary Surratt’s trial in 1865 and her son’s in 1867, was already in a suspicious frame of mind, having seen John Surratt and Paine at the house that very afternoon surrounded by bowie knives, spurs, and revolvers. He claimed that John Surratt refused to include him in the theater party for what Surratt said were “private reasons.”

The party had a carriage for the short ride from the boardinghouse at H Street between 6th and 7th Streets to the theater at 10th Street. John Surratt had a ten-dollar ticket for a box seat. Although Nora at trial claimed not to be able to remember where the box was located, beyond thinking it was an upper seat, the box may well have been the presidential one, which consisted of two adjoining boxes with the partition between them removed on those occasions when the President decided to take in a play. At some point in the performance, Booth visited the box and had a private talk with the men.

Nora in her testimony was never asked the name of the play the party saw, but thanks to Mary Apollonia, who chatted to Weichmann about her evening at the theater, we know it: Nicholas Rowe’s Jane Shore, first performed in 1714. In fact, as the Washington Evening Star advertisement below shows, the play was part of a double bill of one tragedy and one comedy. No one ever mentions the second play, The Love Chase, which must not have made much of an impression on young Mary Apollonia. 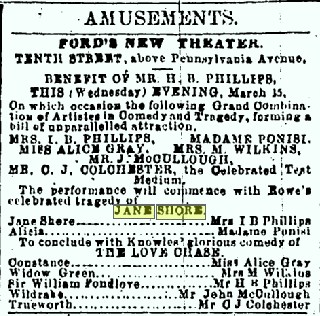 “Jane” Shore (actually named Elizabeth; the first name was the invention of playwright Thomas Heywood), of course, was the mistress of Edward IV. The daughter of John Lambert, a London mercer, she had married a William Shore, another mercer, but the marriage was annulled because of his impotence. Following Edward IV’s death, she was said by Thomas More to have become the mistress of William, Lord Hastings, while Richard III claimed that she was being held in adultery by Thomas Grey, Marquis of Dorset. For reasons which are not entirely clear–most likely her association with Dorset, a wanted man at the time, although More claims that she was accused of plotting with Elizabeth Woodville against Richard–she was jailed at the king’s orders. Later, however, when Richard’s solicitor, Thomas Lynom, fell for her charms, Richard allowed her to leave prison and marry him. Lynom went on to serve the Tudors after Richard’s defeat at Bosworth, and he and Elizabeth had a child or children together. According to More, she was still alive in 1526-27, albeit reduced to poverty. Lynom had died in 1518.

Rowe’s play–described by Rowe himself as a “she-tragedy”–tells a very different version of “Jane’s” story. When the play opens after Edward IV’s death, the evil Duke of Gloucester is chortling over his triumphs over the Woodville faction, and Jane is regretting her fall from virtue and bewailing the sexual double standard:

Mark by what partial justice we are judg’d;
Such is the fate unhappy women find,
And such the curse entail’d upon our kind,
That man, the lawless libertine, may rove,
Free and unquestion’d through the wilds of love;
While woman,—sense and nature’s easy fool,
If poor, weak, woman swerve from virtue’s rule;
If, strongly charm’d, she leave the thorny way,
And in the softer paths of pleasure stray;
Ruin ensues, reproach and endless shame,
And one false step entirely damns her fame;
In vain, with tears the loss she may deplore,
In vain, look back on what she was before;
She sets, like stars that fall, to rise no more.

Hoping that he will intercede with Gloucester to restore her land to her, Jane turns to Hastings, who attempts to force himself upon her. She is saved by the intervention of a servant, Dumont, who in fact is Jane’s disguised husband. His boldness toward a social superior earns Dumont a stay in prison. Jane then takes her case directly to Gloucester, who tells her that Hastings opposes his plan to seize the throne. Horrified, Jane praises Hastings for his loyalty to Richard’s nephews and refuses Richard’s demand that she use her wiles to win over Hastings to Richard’s side. Richard then condemns Jane:

Go, some of you, and turn this strumpet forth!
Spurn her into the street; there let her perish,
And rot upon a dunghill. Through the city
See it proclaim’d, that none, on pain of death,
Presume to give her comfort, food, or harbour;
Who ministers the smallest comfort, dies.
Her house, her costly furniture and wealth,
We seize on, for the profit of the state.
Away! Be gone!

Meanwhile, Jane’s false friend Alicia, spurned by Hastings because of his infatuation with Jane, lies to Gloucester that Jane has persuaded Hastings to plot against him. Gloucester, of course, orders Hastings’ execution, but Hastings is given time for a long farewell scene with Alicia, who confesses her guilt and received his forgiveness. Unfortunately, Hastings’ last words for Alicia are a warning for her not to wrong Jane. A bitter Alicia determines to make Jane share her misery.

Newly released from prison, Dumont/Shore hears from his friend Belmont of Jane’s public penance and destitution and determines to reveal his true identity to her. Meanwhile, Jane, exhausted and famished, seeks shelter from Alicia, who refuses to aid her. Belmont then leads in Shore, who reveals his identity to the fainting Jane and offers her his forgiveness and his protection. Gloucester’s henchmen rush in to arrest the men for aiding Jane, but Shore, realizing Jane is near death, breaks free, allowing Jane to die in his arms.  A grieving Shore orders the king’s men:

Now execute your tyrant’s will, and lead me
To bonds or death, ’tis equally indifferent.

Belmont is left to expound the moral:

Let those, who view this sad example, know
What fate attends the broken marriage vow;
And teach their children, in succeeding times,
No common vengeance waits upon these crimes,
When such severe repentance could not save
From want, from shame, and an untimely grave.

After the show, the men escorted their female companions home,  and then headed back out again, lingering at the boardinghouse just long enough for Surratt to grab a pack of playing cards. For the ladies, the night had ended; for the men, it was just beginning.

4 thoughts on “A Night at the Theater with Jane Shore”