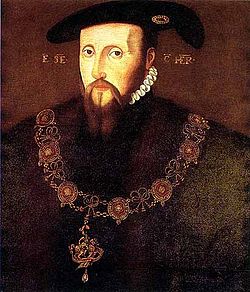 On January 2, 1549, William, Lord Paget sent an unusual gift to Edward Seymour, Duke of Somerset (shown in the portrait here), who was acting as Protector for his nephew Edward VI. Paget, who had been a trusted adviser to Henry VIII and had played a leading role in making Somerset Protector, was in the habit of speaking frankly to the duke; a few days before, on Christmas day, Paget wrote a letter to Somerset in which he stated that he believed that the duke was mistakenly trying to please all men and was lax in his administration of justice. Paget wrote in his January 2 letter, the spelling of which I’ve modernized:

Because the determination to renew gifts of the new year was sudden I could not prepare such a New Year’s gift for your grace as the fashion of the world required me to present to a personage of your estate, and yet considering the favor of your grace to be special towards me, and my love the reciprocal towards you, me thought it best to send your grace though no rich gift yet a token of my heart which wishes both this and all other years hereafter happiness and luck unto you. My token is this schedule here enclosed, wherein as in a glass if your grace will daily look, and by it you read you shall so well apparel yourself as each man shall delight to behold you. I pray your grace to accept this token in good part, which very hearty love and great carefulness of your grace’s well doings hath moved me to send unto your grace to whom I wish as well as I do mine own soul.

Deliberate maturely in all things. Execute quickly the deliberations. Do justice without respect. Make assured and staid wise men ministers under you. Maintain the ministers in their offices. Punish the disobedient according to their deserts. In the king’s causes give commission in the king’s name. Reward the king’s worthy servants liberally and quickly. Give your own to your own, and the king’s to the king’s frankly. Dispatch suitors shortly. Be affable to the good, and stern to the evil. Follow advice in council. Take fee or reward of the king only. Keep your ministers about you uncorrupt. Thus God will prosper you, the king favour you, and all men love you.

How sorely Somerset needed to follow this advice would be proven that October, when a group of councilors, disillusioned with the duke after the violent rebellions of that summer, staged a coup against the Protector. Somerset would spend the New Year of 1550 as a prisoner in the Tower.