Much to the frustration of the historical novelist who chooses Henry Stafford, Duke of Buckingham, as a main character, few of his records survive. Many records were destroyed in 1483, where the Vaughan family raided Brecon Castle after Henry left it for his ill-fated rebellion against Richard III, and more were destroyed by Welsh rebels after Henry VII came to the throne in 1485.

Here, however, is a transcription of one letter by Henry that’s held at the Staffordshire Record Office. No smoking guns here, folks (no “My well beloved Richard. I have taken care of the business in the Tower that you asked me to. Repairs will be needed to the staircase now. Now do I get my Bohun lands?”) Rather, this is simply a letter to an unknown recipient who apparently had claimed an interest in some of Henry’s lands:

Penshurst and Yensfield had been granted to Henry’s grandfather, Humphrey Stafford, first Duke of Buckingham, by Henry VI in 1447, after the death of their previous owner, Humphrey, Duke of Gloucester, so it’s not clear to me on what grounds the recipient made his claim. Evidently, Henry himself was not impressed. In 1519, however, Henry’s son Edward Stafford, the third Duke of Buckingham, wrote a letter to Sir Edward Chamberlain in which he acknowledged Chamberlain’s claim to Penshurst and other manors in Kent and stated that his council had agreed to offer Chamberlain some recompense. Perhaps the Chamberlain claim is related to the one made against Henry years before.

One interesting point about Henry’s letter is its signature, shown in the first picture below. Compare it to the second signature, taken from the famous fragment that contains the signatures and mottoes of Edward V, Richard, Duke of Gloucester, and Henry. In the “three signatures” document, Harry seems to have added his first name “Harre” almost as an afterthought. 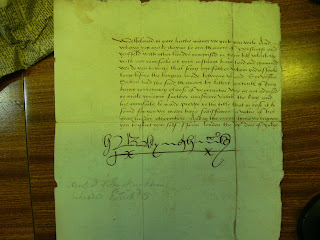 6 thoughts on “A Letter From Henry, Duke of Buckingham”