As everyone who has picked up a new historical novel in the last few years has noticed, the cover-art trend is to depict a person, most often a woman, in such a way that her face is partially or fully obscured or her head missing altogether.* These “headless woman” covers look classy, so much so that as blogger Sarah Johnson points out, they’ve made it onto a classic: the new translation of War and Peace. The alternative these days is to use an image from an art gallery. These covers look even more classy; the only drawback being, as Sarah Johnson has also pointed out, that the same painting often ends up gracing several historical novels.

But classy and pretty as these covers are, they have one huge drawback as far as I’m concerned. They’re no fun. This cover is. 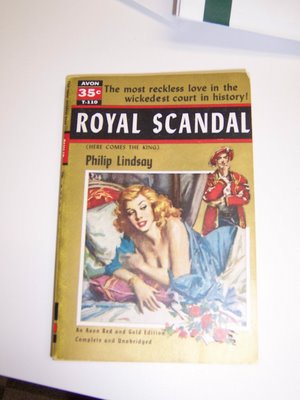 I don’t know what I like about this “Avon Red and Gold Edition” best–Katherine Howard’s permanent wave (Henry VIII did spoil the girl), the caption “(Here Comes the King)” (evidently the novel’s original title, but here looking like an admonition to the recumbent Katherine), the fact that Katherine looks about twice as old as she was, her teasingly exposed bosom, or the 35-cent cover price. All I know is that when I saw this gem on eBay, I knew that I had to have it and that anyone who tried to snipe it away from me would have to look to God for forgiveness, not to me.

I’ve been too busy admiring my new acquisition to read it (and the typeface inside is woefully tiny), but the novel itself looks quite decent, as well researched and well written as anything I’ve seen recently on Katherine Howard. It doesn’t quite live up, though, to the delirious copy on the back jacket: “Her mouth was a kissing mouth, the upper lip drawn in a trifle, demurely, the lower lip heavy, full-blooded: the mouth of a lover . . . soft as a petal, trembling . . .” But then, what could?

Now if I could just get hold of the novels advertised in the back of Royal Scandal, especially Queen’s Caprice, a novel that promises to tell in its “untamed splendor . . . the story of the fabulous, lush and amorous Mary, Queen of Scots, who ruled a nation of half-wild clansmen from a throne of passion.”

____________________________
*Promotional footnote: The Traitor’s Wife, in case a dog-eared copy does not grace your nightstand already, does not have a cover featuring a headless woman. It does, however, feature a lot of beheadings. Maybe even a throne of passion.